I spent much of my childhood in Japan, and attended Narimasu High School in Tokyo.  After graduating from Harvard University and Case Western Reserve University School of Medicine, I trained in internal medicine and infectious diseases at Baltimore City, Johns Hopkins, and Beth Israel (Boston) Hospitals.  After five years of solo private practice in general internal medicine on the rural central coast of Maine, I returned to full-time academics. I have held faculty appointments at Harvard University, Tufts University, Case Western Reserve University, the University of North Carolina, Bowman Gray School of Medicine, the University of Massachusetts, the University of Tennessee Health Sciences Center, and the University of California, San Francisco. My publications include 14 books or monographs, and more than 300 articles in medical journals. I am currently emeritus professor of medicine at UCSF, engaged in finishing a book describing an evidence-based approach to medicinal use of cannabis that attempts to incorporate what I have learned from working with thousands of patients. I am medical editor for the 2017, second edition, of Cannabis Pharmacy, by Michael Backes. It is a best-selling, authoritative, book exploring medical uses of cannabis. 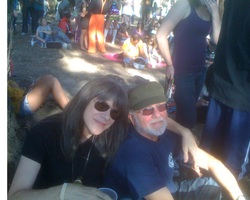 Three years ago, my wife, Cynthia Romanov, and I moved from Fairfax in beautiful Marin County, California to join our daughter, son-in-law, and grandson in hyper-hip Portland, Oregon. Our blended family of four adult offspring and their partners includes Ravi Cusick, a San Francisco firefighter and his wife Megumi; Jonathan D. McCue, a plastic surgeon in Minneapolis and his wife Mandra; Natalia Cusick, the COO of a San Francisco sports (mostly lacrosse) equipment, and her partner Andy who flies around to fix broken high tech stuff that other people can't; and Jessica Trippe, a graphic designer specializing in wine labels and packaging wine, and her husband John Trippe, who is director of e-commerce for a major skate board company. Two of our grandchildren, Meredith and Harrison, live in Minneapolis. A third, Sam, lives nearby in Portland. See pictures of all in the Family Album.
Cynthia (Romanov) worked as the creative director for a design and communications firm in the SF Bay area. She's a writer who also creates collages and mixed assemblages.
Our menagerie includes a self-willed Tibetan Terrier named Trixie, and Murphy, an affectionate semi-feral Tabby cat. I have a huge classical music collection and play the piano, sometimes well. Little Blue, my beloved fish, passed a few years ago, and is buried in the yard in Fairfax under an amaryllis.. 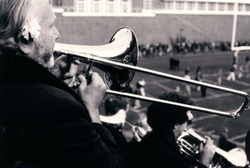 A graduate of Harvard University and Case Western Reserve University Schools of Medicine, Dr. McCue did his residency training at Johns Hopkins and Harvard in internal medicine and geriatrics. He has traveled the world and worked with patients and other medical professionals in a science-based blending of traditional medical treatment and appropriate use of cannabis.  As a distinguished and award-winning physician, Dr. McCue has written 14 books and over 300 articles, in addition to speaking internationally at conferences on many topics including the informed use of medical cannabis.